Tweet
The waves of history are ultimately cycles of sin and redemption:

Meanwhile, Israel is being pushed by Russia to take the Iranian bait and thereby unleash the inevitable chastisement of this world for its sinful, selfish ways.

But make no mistake about it, while Russia may be an instrument of the Lord's chastisement, it is not the House of the Lord.

To the contrary....the Kremlin is the home of the Antichrist:

The hatred and lies of this world are powerless against God's love and truth and His will, not man's, will be done:

Because this world has already been overcome:

When I despair, I remember that all through history the ways of truth and love have always won. There have been tyrants, and murderers, and for a time they can seem invincible, but in the end they always fall. Think of it--always. - Mahatma Gandhi


Know this first of all, that in the last days mockers will come with their mocking, following after their own lusts, and saying, “Where is the promise of His coming? For ever since the fathers fell asleep, all continues just as it was from the beginning of creation.” For when they maintain this, it escapes their notice that by the word of God the heavens existed long ago and the earth was formed out of water and by water, through which the world at that time was destroyed, being flooded with water. But by His word the present heavens and earth are being reserved for fire, kept for the day of judgment and destruction of ungodly men.

But do not let this one fact escape your notice, beloved, that with the Lord one day is like a thousand years, and a thousand years like one day. The Lord is not slow about His promise, as some count slowness, but is patient toward you, not wishing for any to perish but for all to come to repentance.

But the day of the Lord will come like a thief, in which the heavens will pass away with a roar and the elements will be destroyed with intense heat, and the earth and its works will be burned up. [II Peter 3:3-10] 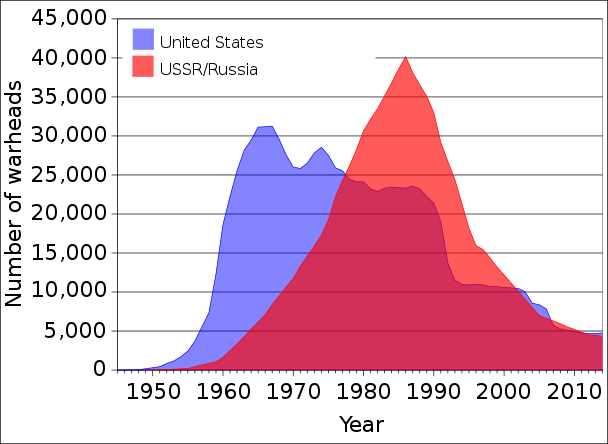 (The chart above shows the nuclear weapon stockpiles of the U.S. versus Russia.)

Russia currently has a nuclear stockpile of 14,000 warheads versus 5,400 for the U.S., and that's based upon stated arsenal comparisons where Washington is likely being far more honest than Moscow.

And while America has effectively mothballed its capacity for building nuclear weapons since the 'end' of the Cold War, Russia has maintained its capacity to develop nukes and has a threatening "breakout capability":

The substantial capabilities of the Russian warhead production complex have been of concern to some U.S. policymakers and nuclear weapons experts. The Russian complex is very large relative both to the U.S. complex and to the projected size of Russia’s nuclear weapons stockpile. Because of manufacturing and technology problems that limit the lifetime of Russian warheads to 10-15 years and because of stockpile management practices that emphasize routine rebuilding of nuclear warheads, the Russian complex also maintains high levels of production. The fear, then, is that Russia could use its large and active production infrastructure to offset arms reductions by quickly building new nuclear warheads in large numbers—that it has a “breakout capability.” Russia’s secretive nuclear weapons policies and uncertainties about the technical capabilities and operational practices of its nuclear weapons complex further exacerbate these fears.

Meanwhile, Moscow has been continuously pumping billions upon billions of purportedly scarce rubles into nuclear war defenses like Yamantau Mountain, a super-bunker the size of the Washington D.C. Beltway being built under the Ural Mountains.

By waging a false peace over the last 20+ years, the Russians have achieved a substantial nuclear war-fighting advantage over America.

The situation is as it is because nuclear war is 'unthinkable' in America but the focal point of global military strategy for Russia....an enemy most appreciative of our willful ignorance on this matter.

"War to the hilt between communism and capitalism is inevitable. Today, of course, we are not strong enough to attack. Our time will come in 20 to 30 years. To win, we shall need the element of surprise. The bourgeoisie will have to be put to sleep. So we shall begin by launching the most spectacular peace movement on record. There will be electrifying overtures and unheard-of concessions. The capitalist countries, stupid and decadent, will rejoice to cooperate in their own destruction. They will leap at another chance to be friends. As soon as their guard is down, we shall smash them with our clenched fist." - Dimitry Z. Manuilsky, Soviet Chairman of United Nations Security Council, 1949

"There is profound error and harm in the disoriented claims of bourgeois ideologues that there will be no victor in a thermonuclear world war." - A. S. Milovidov, Russian Military Strategist

Is it any wonder that the British and French parliaments unanimously endorsed the Munich Accord, which Neville Chamberlain proclaimed meant 'peace for our time', with Hitler on the eve of World War II?

The West is its own worst enemy in many ways. The insistence of our people to cooperate in their own mass murder is sickening and sad.

Those still conscious of reality are left with little option but to evacuate the West or somehow prepare for surviving a nuclear holocaust:

Rather than try to deal with and correct the situation, people today follow after misleaders rather than leaders. Americans want to be misled in an ill-fated hope to maintain their self-delusions and false sense of security because they can't handle the truth and consequences of their unrighteousness.

When confronted with a choice between a known American hero in the war against communism (and devout Christian) and a likely actual communist (of Arab descent with signs of Islamic leanings), the American people chose the communist as their President and Commander-in-Chief:

Now someone who is likely not a natural born American citizen and who likely never registered for the military draft, in other words a candidate that was not even qualified to be President of the United States and Commander-in-Chief in the first place, is about to be the leader of the Free World.

As has been maintained in this blog for some time now, Americans have become selfish, arrogant and foolish beyond all reason leading our society headlong toward collective suicide....and not in some metaphorical sense.

Yet, most of those left standing after the radioactive dust settles will still be wondering what happened.

Is it not obvious?

"The coming of the lawless one by the activity of Satan will be with all power and with pretended signs and wonders, and with all wicked deception for those who are to perish, because they refused to love the truth and so be saved. Therefore God sends upon them a strong delusion, to make them believe what is false, so that all may be condemned who did not believe the truth but had pleasure in unrighteousness." [2 Thessalonians 2:9-12]

When there's a chemical missile attack on Israel, know that the war is here as I've foreseen.
Posted by J Adams 0 comments