Putin Cries With Laughter At The World 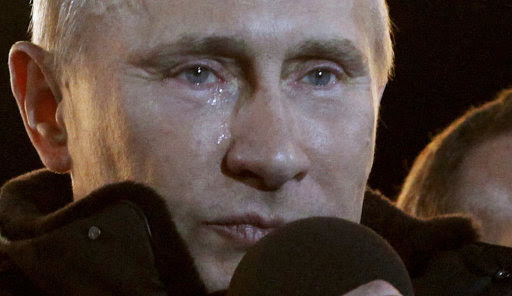 Video and pictures of Vladimir Putin with a tear-filled eye are being transmitted around the world as the Russian Prime Minister's defrauding of humanity continues unabated with his purported reelection as president of Russia.

Vladimir Putin has claimed victory in Russia's presidential election, amid allegations from his rivals that voting was marred by fraud.

Speaking at a rally attended by tens of thousands of supporters outside the Kremlin walls in Moscow, the prime minister insisted it had been an "open and honest" contest.

He added: "I promised you we would win. We have won. Glory to Russia".

Russian Prime Minister Vladimir Putin claimed victory in a presidential election that his opponents say was marred by fraud, accusing protesters against his rule of seeking to usurp power.

“We won in an open and honest fight,” Putin said in front of thousands of supporters near the Kremlin last night as tears streamed down his face. “We showed that our people can easily distinguish between a desire for novelty and renewal from political provocations which have only one goal: to destroy Russian statehood and usurp power.”

Putin, 59, who has been at Russia’s helm for 12 years including the last four as premier, won another six years in the Kremlin with 63.7 percent of the vote, with more than 99 percent of all ballots counted. About 65 percent of the country’s 110 million eligible voters cast ballots, Central Election Commission chief Vladimir Churov said on state television. Opposition groups plan a rally in Moscow today.

While the masses will undoubtedly fall for the notion that Vladimir Putin became teary-eyed out of joy in returning to the Russian presidency (like he had lost control as prime minister?), the truth is that if there were any sincerity to his tears it would be from his inside laughter at the mind-boggling gullibility and stupidity of this world.

Vladimir Putin is one of the most corrupt, murderous, tyrannical leaders in modern history.

As head of the FSB and Russian president between the 1999 and 2008, he and his associates amassed multi-billion dollar empires through looting of national resources:

What's worse, Putin's ascension to the Russian presidency was built on the corpses of hundreds of innocent Russian citizens murdered in the 1999 FSB bombings of apartment buildings that were blamed on Chechen separatists:

The FSB defector who helped reveal to the world this diabolical crime, Alexander Litvinenko (I ran the "Litvinenko Chronicles" prior to his murder), was assassinated with radioactive polonium in 2006. The KGB men who carried out the dastardly deed have been treated as heroes in Russia and protected from extradiction to the U.K. for their murderous crime.

Rather symbolically, in April 2010 Putin and his cohorts in Russian intelligence surreptitiously took down Poland's 'Air Force One' in Smolensk Russia killing President Lech Kaczyński and his wife, much of his staff, former Polish President Ryszard Kaczorowski, and a large chunk of Poland's military high command including Chief of Staff Franciszek Gągor. The Polish entourage was headed to a commemoration ceremony for the 1940 slaughter of 22,000 Polish officers and others in the Katyn Forest by Russia's secret police:

Vladimir Putin took charge of the investigation and blamed the tragedy on an accident caused by Polish negligence and incompetence.

But all these crimes will likely end up a footnote of history compared to what Vladimir Putin and his demonic henchmen ultimately have planned for this world:

"By all accounts, we will not manage to escape a big war (that)....may lead to the annihilation of cities."
- Russian Orthodox Church Archpriest Vsevolod Chaplin

Of course, why should I even bother trying to explain the truth to a world that doesn't care?

The coming of the lawless one is according to the working of Satan, with all power, signs, and lying wonders, and with all unrighteous deception among those who perish, because they did not receive the love of the truth, that they might be saved. And for this reason God will send them strong delusion, that they should believe the lie, that they all may be condemned who did not believe the truth but had pleasure in unrighteousness. [2 Thessalonians 2:9-12]

Everyone seems to think they are above 'The Truth' in this day and age. How smart is that?
Posted by J Adams