Must see documentaries and interviews of Jonathan Cahn regarding parallels between the last days of ancient Israel and current events for America centered around the prophecy of Isaiah 9:10:

One of Cahn's most revealing points is that the "foundation" of the American Republic symbolically cracked on 9/11:

"....the propitious smiles of Heaven can never be expected on a nation that disregards the eternal rules of order and right which Heaven itself has ordained; and since the preservation of the sacred fire of liberty and the destiny of the republican model of government are justly considered, perhaps, as deeply, as finally, staked on the experiment entrusted to the hands of the American people." - George Washington, First Inaugural Address, New York City, April 30, 1789


Washington's inaugural address was made at Federal Hall after which America's governing representatives worshiped at nearby St. Paul's Chapel. These buildings are near ground zero in lower Manhattan, and on 9/11 the foundation of Federal Hall, where the American republic was 'founded', literally cracked.

There's some other points that the author seems to have overlooked.

Note how former Senator John Edwards is credited with making the "utterance" that seals America's judgment.


Cahn fails to note that Edwards shares the name of Jonathan Edwards, arguably the founding father of American Christianity:

Wiki: Jonathan Edwards (October 5, 1703 – March 22, 1758) was a Christian preacher and theologian. Edwards "is widely acknowledged to be America's most important and original philosophical theologian," and one of America's greatest theologians.

"Men must be governed by God or they will be ruled by tyrants." - William Penn

*** THE MYSTERY OF THE SHMITA & THE SEPTENNIAL SABBATICAL CYCLE ***

In the segments about "The Mystery Of The Shemitah", Cahn points out how the two largest stock market crashes (in terms of Dow points) in 2001 and 2008 occurred on the same day on the Hebrew calendar: Elul 29, which marked the end of the last two "Sabbatical Years" (which occur every seven years). Given my own research findings regarding autumn panics based upon the Hebrew calendar, this really struck a chord. 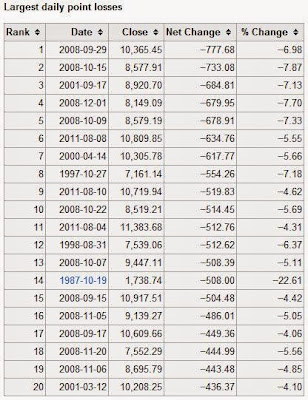 
The sabbath year, in Hebrew shmita (Hebrew: שמיטה‎, literally "release"), also called the Sabbatical Year, is the seventh year of the seven-year agricultural cycle mandated by the Torah for the Land of Israel, and still observed in contemporary Judaism.

During Shmita, the land is left to lie fallow and all agricultural activity (including plowing, planting, pruning and harvesting) is forbidden by Torah law. Other cultivation techniques (such as watering, fertilizing, weeding, spraying, trimming and mowing) may be performed as a preventative measure only, not to improve the growth of trees or plants. Additionally, any fruits which grow of their own accord are deemed hefker (ownerless) and may be picked by anyone. A variety of laws also apply to the sale, consumption and disposal of Shmita produce. A second aspect of Shmita concerns debts and loans. When the Shmita year ends, personal debts which are due during that year are considered nullified and forgiven. The Book of Leviticus promises bountiful harvests to those who observe the shmita and makes observance a test of religious faith.

Given 250 trading days per year, seven years entails 3500 possible days in 14 years. As for the last day of the Sabbatical Year, this occurs once every seven years. Since there were two of three days of significance, the odds of Elul 29, 5761 coinciding with one of the three worst point loss days is 1 in 1166. This would be the odds for the second hit as well, i.e., Elul 29, 5769, occurring on one of the three possible days. Thus, the odds for a coincidence of the last day in the Sabbatical Year in 2001 and 2008 both occurring on one of the three largest point declines in stock market history is the multiple of the two probabilities, i.e., one chance in 1361889. (It's actually more significant than this combinatorially since the three largest point declines could be measured against all U.S. stock trading days, but this analysis gives one a good idea of how unlikely such a "coincidence" is.)

So what does this "mean"?

The Sabbatical Year ends on Elul 29, the last day on the Hebrew calendar before the Rosh Hashanah and the Jewish new year. Over the last three decades, Sabbatical Years ended on the following days:

All years were marked by major reversals in the stock market with acute declines in the autumn period: 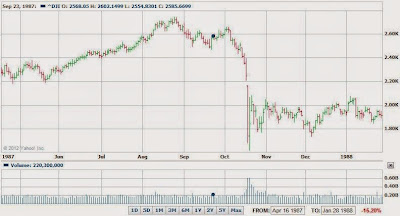 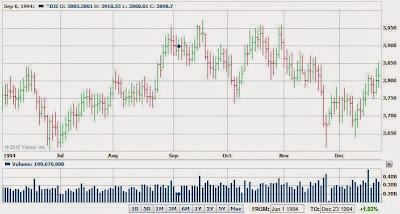 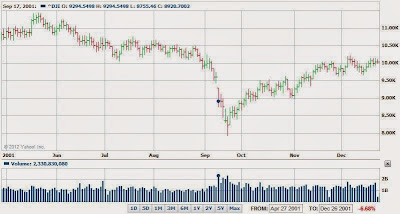 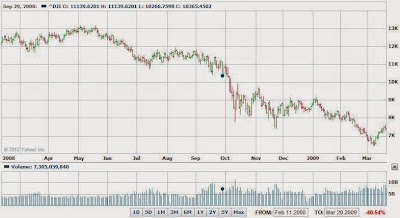 On a long-term historical chart, a 7-year "Sabbatical Cycle" appears: 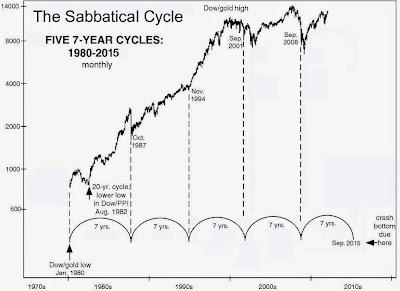 [One might also note the 1973 Yom Kippur Arab surprise attack on Israel soon after the Sabbatical Cycle Year ended that time around.]

What is the nature of this cycle?

While my thesis highlights the manic-depressive character of these historical cycles, what Jonathan Cahn is helping to reveal is the cycles are also about sin and redemption, which is a key feature of the Judeo-Christian saga spelled out in the Bible.

The bottom line is this IMO. 'Forgiveness of debts' can be achieved one way or another. If those who claim to be doing "god's work" are serving Mammon contrary to God's will for mankind, then this will ultimately be corrected.


History as His Story

Covenant theology presents the Bible’s own framework for salvation, because like the Bible it unfolds the person and work of Jesus Christ. When Paul wrote, “For all the promises of God find their Yes in him” (2 Cor. 1:20), he was pointing to God’s covenant promises. What has God promised as His gift of grace? The answer is found in His covenants, which offer life, preservation, a land of promise, a glorious people, a ministering priest, a righteous king, and an atoning lamb. These promises are all Yes and Amen only as we trust in the life, death, and resurrection of Jesus, the Christ of the covenants. The Bible history taught by covenant theology is truly His story, so that we might find the fullness of God’s grace in Jesus Christ alone.

Is it any wonder that the instruments of the coming chastisement of God's people are operating in the name of Islam (submission to God's will) and Communism (to share one's wealth)? [Not that that makes these forces sincere and righteous....au contraire...] 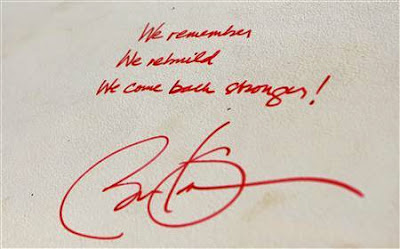 Obama vows "we remember, we rebuild" at World Trade Center

(Reuters) - President Barack Obama and first lady Michelle Obama on Thursday toured the soaring skyscraper being built to replace the twin towers destroyed on September 11, 2001, in a poignant visit to mark a new chapter of recovery from the traumatic attack.

Inscribing one of the steel beams that will be part of the building's framework, Obama wrote: "We remember, we rebuild, we come back stronger!" followed by his signature.