Has the 'Apocalypse Wave' begun? 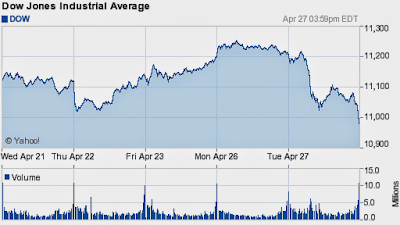 According to the Elliott Wave Principle, there's reason to believe that the rebound in stock prices and collective confidence since the March 2009 low has just completed and Primary Wave 3 down, what I've been warning will constitute the "Apocalypse Wave", is now underway.

The Elliott Wave Principle maintains that fractal cyclical patterns regularly unfold in mass e-motion (energy in motion) that is reflected in the movement of market prices and stock prices in particularly. Here is the basic pattern:

A key tenet of the Elliott Wave Principle is that the stock market will retrace specific percentages based upon the fractal pattern that unfolds over time. More specifically, retracements will tend to abide by Fibonacci relationships since the underlying wave pattern is based upon fractal geometry rooted in the Golden Ratio of .618. (Note how the wave counts in the diagram above abide by the Fibonacci series of 1,1,2,3,5,8,13,21,34,55,89,144..., where each number is the sum of the two prior numbers in the series.)

Based upon this Elliott Wave tenet, it appears that the DJIA just completed its Primary Wave 2 retracement of Primary Wave 1 down because the index has rebounded 61.8% of the drop from the October 2007 high of 14,198 to the March 2009 low of 6,470. The total point loss was 7,728 Dow points of which 61.8% is 4,776 points. A rise of 4,776 points in the Dow from the March 2009 low is equivalent to Dow 11,247....a level that was reached intraday yesterday. In his August 2009 investment letter, Robert Prechter projected this potential with a chart that he updated this month accordingly:

As overviewed in my thesis, Elliott Wave patterns in the stock market reflect cycles in mass emotion between extremes of optimism and pessimism as prices swing between highs and lows, respectively:

At the end of Robert Prechter's "Elliott Wave Theorist" investment letter, the following explanation appears: "The Elliott Wave principle is a detailed description of how markets behave. The description reveals that mass investor psychology swings from pessimism to optimism and back in a natural sequence, creating specific patterns in price movement." The reason that Prechter believes market waves are caused by bipolar swings in popular mood is because at market tops and bottoms the consensus beliefs and expectations of investors are irrationally optimistic or pessimistic, respectively. Ups and downs in market prices are thus caused by the back and forth upset of investor expectations.

In this context, note that investor sentiment has been 'obscenely' optimistic in recent weeks suggestive of an important top. 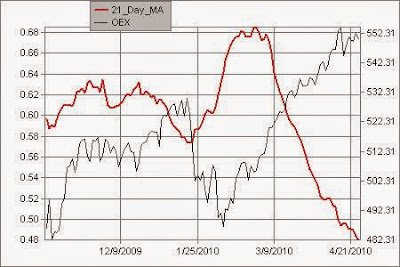 If, indeed, the Elliott Wave Primary Wave 2 peak has just been reached in the Grand Supercycle bear market and Primary Wave 3 down, the "Apocalypse Wave", is next, what does this mean? Well, just consider the following chart presented in Robert Prechter's Elliott Wave Theorist January investment letter projecting the stock market's course over the next year or so:

That is not a misprint. The Elliott Wave Principle suggests a 90%+ drop in stock prices, to Dow 1000 or lower, lies ahead.

What sort of historical events could lead to such a catastrophic upset of mass beliefs and expectations? That's precisely the question I've sought to answer and in so doing have been led to realize that what the world is facing is literally biblical in scale, i.e., the prophetic Apocalypse is at hand.

As to why we face such a terrible outlook, it is a matter of individual and collective irresponsibility taken to an historically unprecedented irrational extreme, i.e., the self-destructive selfishness of man is running its inevitable unreasonable course. The key point is that the "Apocalypse" is the fate man has made by not heeding Christ.

Importantly, the Elliott Wave pattern reflects the fractal-based pattern of human experience that establishes the holographic nature of the universe in which we dwell (MORE), i.e., the pattern in and of itself is proof that secular materialism is wrong and reveals that God exists and loves us given the evil-minimizing nature of Creation we partake in (which, ironically, is probably the most difficult message to convey at this tragic historical juncture making my job seemingly impossible....but I have great faith):

"Reality cannot be found except in One single source, because of the interconnection of all things with one another. ... I maintain also that substances, whether material or immaterial, cannot be conceived in their bare essence without any activity, activity being of the essence of substance in general." (Gottfried Leibniz, 1670)

"As is well known, the theory of the maxima and minima of functions was indebted to (Leibniz) for the greatest progress through the discovery of the method of tangents. Well, he conceives God in the creation of the world like a mathematician who is solving a minimum problem, or rather, in our modern phraseology, a problem in the calculus of variations – the question being to determine among an infinite number of possible worlds, that for which the sum of necessary evil is a minimum." (Paul du Bois-Reymond, 1997)